(This story was featured in the Southern Cross, the newspaper of the San Diego Catholic Diocese, in May 2014.  The story was run in Spanish.  Here is the English version.)

November 12, 2013 – We are on a visit to the Tijuana colonia where the Franciscan Madres from Casa de Los Pobres go to provide catechism classes to the local children.  The area is a plot of land only about an acre in size.  Due to lack of funds and the difficulty with which any construction project may be undertaken in the area, it is undeveloped land.

The Madres have constructed a small building with three classrooms, but the building has been subject to severe vandalism.  All of the lights in the building have been stolen.  The outside walls are covered in graffiti.  The roof is covered in stones that people have thrown, and entire shingles have been ripped off.  The sheetrock on the ceilings shows severe water damage.

There was once a water storage tank, but locals tore off its roof and used the tank as a hideout for doing drugs.  In the face of these great obstacles, the Madres continue to use what remains of the structure to teach the children. It is a dangerous neighborhood, and the two Madres who work there Monday through Friday must leave promptly when the sun passes the horizon.

Standing on the front porch of what remains of the Madres’ structure, I see a number of 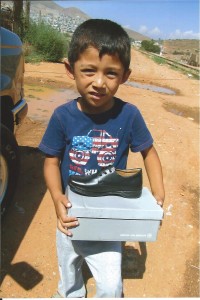 houses that have curiously suffered no vandalism. Some of the houses even look fairly expensive.  There is brown, clay-ridden dust everywhere. The roads are haphazardly paved here and unpaved there. Houses are well-constructed and painted in one area and seemingly made of a random assembly of boards and scraps in another area. A storefront here and there is riddled with graffiti. Some homes bring to mind a coop for an animal or a fenced-in area for dogs.

I ask Madre Angelica how this can be so. She explains that the well-kept homes or buildings belong to drug cartel or gang “jefes” (bosses).

Madre then takes us around the neighborhood to visit a few families. The first family lives in one of the well-painted homes that haven’t suffered any damage from the gangs. It is a clean home, but it has only two rooms and a bathroom. The family sleeps all together in one room, and the other room is the kitchen. They have been deported from the United States, and now this is all they have.   I can tell that they own very little. No piles of toys, no 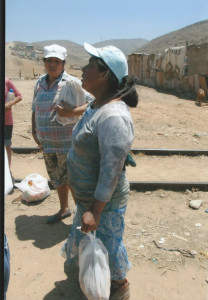 family portraits – just cleanly emptiness.  They are required to volunteer for a protestant church and meet a quota for attendance there in order to remain in their home, even though they are Catholic. They have love and hope though, and this sustains them. During our visit with the children in their dining room, I notice a picture of the Sacred Heart of Jesus on the wall with a small Our Lady of Guadalupe card beneath it.

When we arrive at the next home, a radio is playing very loudly.  The mother of the house turns down the radio and welcomes us into the foyer resembling a lean-to.  The area is completely open at both sides.

We enter the only other room which is her kitchen-bedroom. There are small roosters running around everywhere, and a small dog chained to a table and barking at my feet.

Her son suffers from a developmental disorder that makes him unable to speak or walk properly.  He keeps turning the radio back up and the mother laughs to dismiss it as an innocent act.

The Madres are a candle flickering in the midst of this darkness.  They are spreading this light among the children.  It is the silent beginnings of a wildfire.  The Madres want to build a Casa de Los Pobres here in this community in such desperate need, but funds will not allow it at the moment.  The Diocese wants to build a chapel, but these people need much more than a chapel.  What they need is a clinic, a training center, a regular source of food.

This is part 1 of a 2-part series written by Nicholas Ballor, a Jesuit novice who visited the Casa de Los Pobres in Tijuana, Mexico as part of his formation.