Those the Casa helps try to help others . . .

“My mother had come to La Casa de Los Pobres many years ago with my brother who had polio. She used to bring him to consultation. We lived in a poor neighborhood. We were too many people living there. My mother worked babysitting other people’s children to survive. 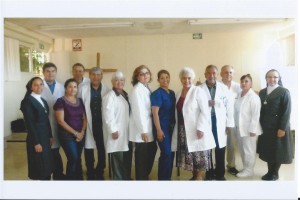 Staff “angels” of the Casa

“I was alcoholic, I was a tramp and used to walk barefoot. I entered rehabilitation in 2004    after being imprisoned due to alcoholism. On the third month, I started having a very strong pain in the stomach and went to an economical clinic. There, they calmed the pain, but in the following morning I was feeling very sick. I remember then that my Mom used to come to La Casa de Los Pobres, and I came on a Friday. They told me I needed to go to the Social Service department for a consultation pass, and I spoke with Sister Gudelia.

“She said there were no more consultation passes, but she looked at how sick I was, and told me to stay and wait until the last patient — that she was going to take me to the best physicians in the clinic. I said inside, “Thank God.”

“After the doctor saw me and asked me some questions, he told me that I had viral hepatitis and typhoid. Plus gastroenteritis because I was drinking tap water and drinking water from puddles. The doctor asked me if I believe in God and told me they were going to do all they could — and that I better believe in God and that the only payment I was going to do was to return healed one month later.

“I started talking medication the doctor ordered, praying, and started believing in God. A month after, I started feeling very well and when I went to the Casa de Los Pobres clinic, they ran tests and found they were negative.

“I want to thank God, Doctor Rodriguez and to Casa de Los Pobres for all you have done for me. Now, I am receiving therapy and you have been a blessing in my life. God bless all the clinic staff. I’m very grateful. I no longer drink, and . . .

“I am helping others in their rehabilitation. Thanks.”