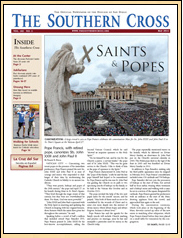 The work of the Sisters of Casa de Los Pobres was featured in the Southern Cross in the May 2014 issue!

Nicholas, a Jesuit novice, accompanied the madres to the colonias.  His two-part account of his visit to the colonias gives a detailed look into the life of the poorest of the poor, living just over the border in Tijuana, Mexico.

The Southern Cross article appeared in Spanish — but we have the English version posted here:

OR DONATE BY MAIL:

We have NO OVERHEAD

100% of every donation goes directly to help the poor in Tijuana, Mexico.

Adopt a Student with your monthly donation

Or help us feed 1,000 hungry people each day with a monthly donation. We are reduced to providing only one meal a day -- can you help? DONATE NOW!